China has blocked imports from hundreds of Taiwanese food producers in what Taipei perceives as the opening of a campaign to economically punish the country for the visit of US House Speaker Nancy Pelosi.

Since Monday evening, when US and Taiwanese officials confirmed that Pelosi would be traveling to Taiwan to meet with President Tsai Ing-wen on Wednesday, the Chinese customs administration has suspended imports of more than 2,000 of approximately 3,200 food items from Taiwan.

Beijing has a long history of punishing other countries for nasty behavior by cutting them out of its market and has made extensive use of such levers against Taiwan. But analysts and government officials said the move was a huge expansion of that economic war.

“In the past, China has hit single primary sector products such as specific fruit or fish, thus they have kept the overall macroeconomic impact on Taiwan limited, but could affect regions where the Democratic Progressive Party is strong,” he said. Chiu Chui-cheng, vice president of Mainland Affairs Council, China’s cabinet-level political body in Taiwan.

“But now they are expanding it immensely as they target processed foods, which gives them enormous extortion powers,” Chiu said. “This is probably just the beginning. We are confident that they will further strengthen their measures of economic coercion. “

The Communist Party of China is extremely hostile to Tsai’s DPP, which it describes as “Taiwanese independence elements” despite the party’s support for maintaining the status quo in the Taiwan Strait.

The ban could weaken the DPP in local elections scheduled for November, when voters typically focus on local economic, social and environmental issues.

In early 2021, China banned Taiwanese pineapples, a move the Tsai government addressed with a viral campaign by marketing the fruit as “freedom pineapple” and “democracy pineapple”, helping to open alternative export markets. .

Beijing also blocked imports of waxed apples and custard apples and added groupers to the blacklist this year.

Although China has long been a major export market for agricultural and fishery products from Taiwan, such shipments amounted to only $ 200 million annually, a fraction of Taiwan’s overall exports to China.

The imports that Beijing has now suspended cover 35 categories including fish and seafood, edible oils and cookies and cakes, hitting publicly traded companies such as instant noodle and soy sauce maker Ve Wong and Chi Mei, which produces frozen foods. . 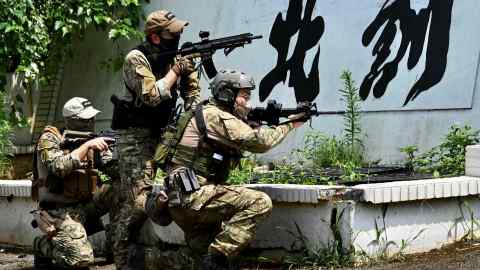 Officials said they were still evaluating the potential damage from the Chinese move, but agreed it would be considerable.

The Chinese customs administration has made the suspension of imports public on its website by displaying “suspended imports” for Taiwanese companies which said they did not complete registration under the new rules.

The Taiwanese government said it would help companies complete registration, but added that it did not hope this would lead to the ban being lifted.