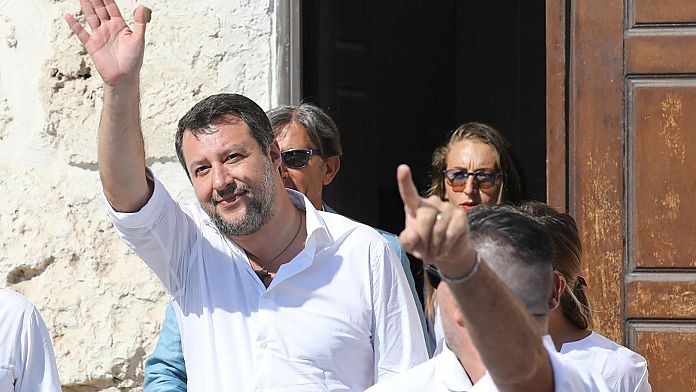 Italy’s controversial former interior minister, Matteo Salvini, tried to put migration on the agenda ahead of the country’s early elections next month.

He visited Italy’s southernmost island, Lampedusa, and said that only 15% of current migrant arrivals qualify as refugees.

Salvini also expressed concern that a reception center for migrants in Lampedusa was close to collapse due to overcrowding, calling it “unworthy of a civilized country”.

The center has a capacity of around 350 people, but currently 1,500 people stay there.

“Lampedusa is the gateway to Europe, it cannot be the refugee camp of Europe,” Salvini told reporters after a visit to the island on Thursday.

“Those who have the right to come to Italy, come by plane, not by boat at the risk of their lives. Those who have no right, do not come”, added the leader of the Lega party, who wants asylum requests to be made in the countries where the migrants are leaving.

The next elections in Italy

Salvini is promising a return to his tough immigration policies if the right-wing coalition wins the September 25 parliamentary vote.

During Salvini’s short but dramatic tenure as interior minister in 2018-19, migrant arrivals to Italy dropped dramatically as he pursued deterrence policies, including the government’s long delays in assigning safe havens to rescue ships.

He is currently on trial in Sicily, accused of kidnapping in one of these cases, while the charges have been denied in another.

“I remember that in 2018, 2019, immigration was absolutely under control. The fight against human traffickers and traffickers has been absolutely effective, “Salvini said.

While his Lega led the right-wing coalition in the 2018 Italian elections, it lost popularity after joining Draghi’s consensus government.

Now he is far behind in the polls behind another right-wing coalition partner, the far-right Brothers of Italy led by Giorgia Meloni.

This leaves Salvini fighting for political relevance. If the right-wing coalition wins the September 25 vote, the party leader with the most votes would be chosen as premier to form a new government.

Is migration a problem in Italy?

The Central Mediterranean is the deadliest migration route in the world, with nearly 20,000 dead and missing since 2014, according to the International Organization for Migration (IOM).

And the pace doesn’t seem to slow down. The NGOs SOS Méditerranée, Doctors Without Borders (MSF) and Sea-Watch have rescued more than 1,000 people at sea in recent days.

After nine days at sea, the Italian authorities allowed him to dock in the port of Taranto, MSF announced Thursday.

“This prolonged period of lockdown at sea is one of the longest ever experienced by our team. This must not happen again,” tweeted the NGO.

In a joint statement released on Wednesday, NGOs called on the EU to resume search and rescue activities to help them respond to the influx of migrants.

The EU concluded its controversial operation to combat human trafficking in the Mediterranean in 2020, replacing it with Operation Irini on maintaining the UN arms embargo on Libya.

“The removal of European search and rescue resources (…) has proved lethal and ineffective in preventing dangerous crossings,” deplored Xavier Lauth, director of operations at SOS Méditerranée.