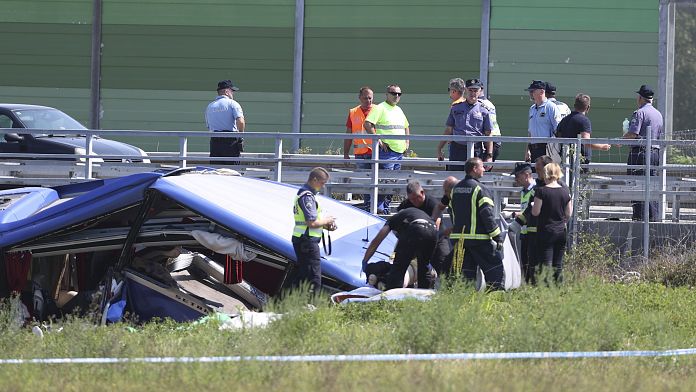 A bus carrying pilgrims to a shrine in Bosnia crashed in northern Croatia on Saturday, killing at least 12 people and injuring many more, according to authorities.

The Croatian Interior Minister said the victims were probably Catholic pilgrims on their way to the shrine in Medjugorje.

The ministry initially announced on Twitter that 11 people had died. Officials said another passenger died later in the hospital and the bus was carrying 43 people.

About 30 people were injured – 18 seriously – and were transported to several hospitals in Zagreb, said the director of Croatian emergency services, Maja Grba Bujevic.

Croatian state television HRT said the most likely cause of the accident was the driver falling asleep.

The broadcaster showed a video of a wrecked blue bus in a ditch near the highway. The bus was traveling in the direction of Zagreb, the capital of Croatia.

Polish Prime Minister Mateusz Morawiecki said the bus was taking pilgrims to the Catholic shrine in Medjugorje, a city in southern Bosnia. The sanctuary is Europe’s third most popular pilgrimage destination after Lourdes and Fatima, although the Vatican has not verified any of the reported miracles that witnesses claim to have seen there.

“This morning I talked about the details of the tragedy with Croatian Prime Minister Andrej Plenkovic, who assured the full support of Croatian medical services,” Morawiecki said on Facebook. “I recommended our consular services to organize a support organization for the families of participants in the incident.”

Croatian Interior Minister Davor Bozinic said the bus came from “a place close to Warsaw” and that information suggested it was transporting pilgrims to Medjugorje.

The accident occurred at 5:40 local time (3:40 GMT) approximately 50 kilometers north of Zagreb on the A-4 highway. “The bus deviated from its path and slipped into the ditch along the highway,” police spokesman Matko Muric told AFP.

Traffic is particularly intense during the summer months on Croatia’s roads, which welcome millions of tourists every year, especially on the Adriatic coast. Polish tourists are among the most numerous: between January and July, over 580,000 Polish tourists visited Croatia.

In July 2021, ten Kosovo citizens died in a bus accident on a highway in eastern Croatia.