People will be “blown away” by Tesla’s humanoid robot Optimus, claims Elon Musk, who says he could serve as a companion or do menial tasks after debuting at AI Day on September 30

By Christopher Carbone US Science and Technology Editor for Dailymail.Com

Elon Musk unveiled a new teaser image of his company’s humanoid robot Optimus, which will be fully revealed late next month.

The tech mogul showed off a picture of robotic hands forming a heart at the company’s annual meeting in Austin on Thursday night and announced a full reveal of Tesla Optimus at AI Day on September 30.

Few details are known about the robot, but Musk said it would take on tasks that humans find boring or repetitive and could even serve as a companion.

“AI Day part two, I think people are going to be blown away,” Musk said. “But that’s late next month, so let’s leave that – there’s going to be a lot of cool stuff.” 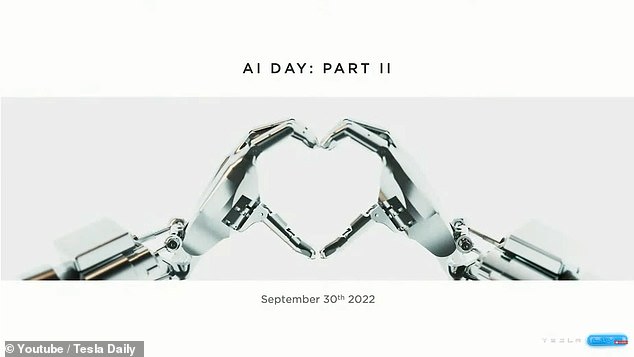 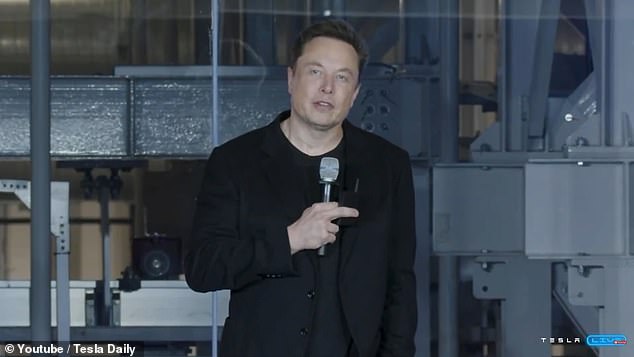 “AI Day part two, I think people are going to be blown away,” Musk said. “But that’s late next month, so let’s leave that – there’s going to be a lot of cool stuff.”

The Tesla-Bot, which would be 5ft 8 tall and weigh 125 pounds, is said to contain the autopilot computer used in the company’s electric cars, which will allow the humanoid to recognize real-world objects, although the robot will have its own customized sensors will and actuators.

It will also be able to deadlift up to 150 pounds, carry 45 pounds, walk 5 miles per hour, and have human-like hands as well as visual sensors that give it the ability to “see”.

‘[You can] Talk to him and say, “Please take this bolt and attach it to a car with this wrench,” and he should be able to do that,” Musk said of the robot last August. “Please go to the store and get it Give me the following foods.’ Such things. I think we can do that.’

Tesla’s autopilot cameras will be mounted on the front of the bot’s head, and its inner workings will be powered by the company’s full self-driving computer. The bots appear to be powered by Tesla’s Full Self-Driving computer interface, which is included in the Tesla Model 3, X, S, Y and Roadster. 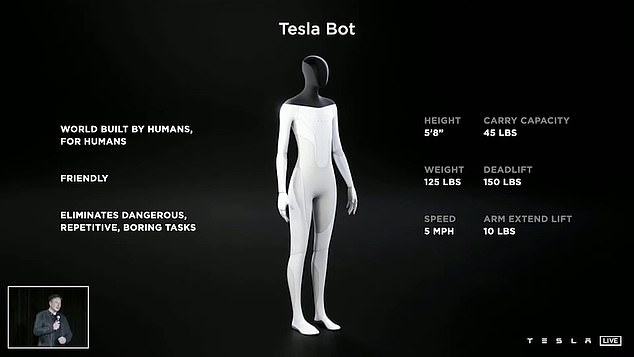 Few details are known about the robot, but Musk said it would take on tasks that humans find boring or repetitive and could even serve as a companion

Previously released renders have shown that it could end up looking like the ‘NS5’ robots in the 2004 film I, Robot. But for anyone worried about a Terminator-style situation, Musk has tried to allay those fears as well.

What do we know about Tesla Optimus?

It will have the ability to move at 5 mph, deadlift 125 pounds and carry 45 pounds

The bot will be “friendly” to humans

The robot will be able to do repetitive or tedious tasks, but could also serve as a companion

“It’s supposed to be friendly, of course,” Musk said during the first Tesla bot announcement last year. “And navigate a world built for humans.”

The technology leader said at the first presentation that humans would be able to outrun and overpower the Tesla Optimus if the need arose.

During a question and answer session following Tesla’s AI Day last year, Musk said, “We should be concerned about AI. What we’re trying to do here at Tesla is useful AI that people love and that’s…clearly good.”

Presumably, the public will learn more about actual Optimus production plans on September 30, when Musk will unveil a prototype of the machine.

“We have a very talented team at Tesla that I am working closely with to have a humanoid robot prototype ready by the end of September. And I think we’re following that point,” Musk said at a business event in June.

The notion of robotic companions may seem far-fetched. However, Intuition Robotics, which makes a bot called ElliQ, was recently picked up by New York officials for 834 of its machines, which can help seniors struggling with loneliness.

Robots are already having a major impact on manufacturing. According to the Material Handling Institute, the adoption of robotics in warehouses will increase by 50 percent or more over the next five years. 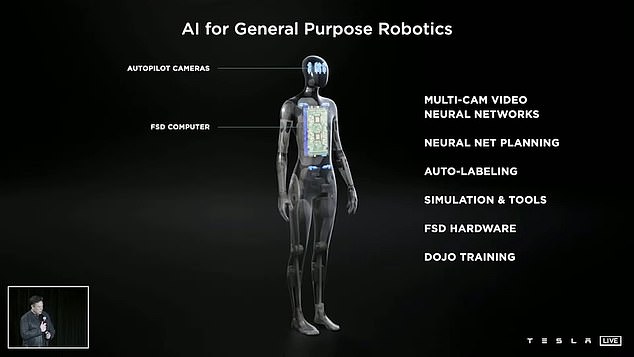 “We have a very talented team at Tesla that I’m working closely with to have a prototype humanoid robot ready by the end of September,” Musk said previously