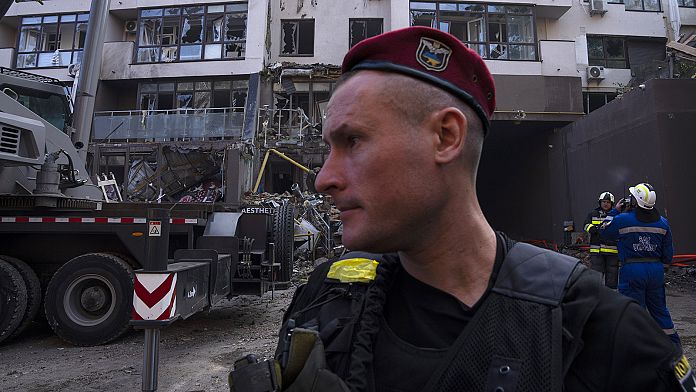 Ukraine is facing “brutality” never seen in Europe “since World War II” during the invasion of Russia, said Jens Stoltenberg on the opening day of a crucial NATO summit in Madrid.

The comments come the day after a Russian attack on a crowded shopping mall in Kremenchuk, central Ukraine, killed at least 18 people, according to a provisional toll. The strike was described as a “war crime” by G7 leaders.

NATO countries, which have already supplied billions of euros worth of weapons to Kiev, will agree in Madrid “a comprehensive assistance program” to help Ukraine “enforce its right to self-defense,” Stoltenberg said in a briefing. together with the Spanish Prime Minister Pedro Sanchez.

“It is extremely important to be ready to continue to provide support because Ukraine is facing a brutality that we have not seen in Europe since World War II,” said Stoltenberg, NATO secretary general.

The summit of the military alliance, which will last until Thursday, brings together more than 40 heads of state and government in the Spanish capital. It will be largely devoted to the war launched by Russia against Ukraine on February 24.

On Monday, Stoltenberg announced a massive increase in NATO rapid reaction troops from 40,000 to 300,000, in a major strengthening of the alliance’s eastern flank.

2. Survivors describe the “hell” of the Russian attack on the Kremenchuk shopping center

Survivors of the Russian missile attack on a shopping mall on Monday in central Ukraine they described their experiences, with one calling it simply “hell”.

At the Kremenchuk public hospital, five people are crammed into a room in an intensive care unit, their wounds wrapped in bloody bandages. A corpse lies on a stretcher outside, covered with a blanket.

Yulia, a 21-year-old woman covered in deep cuts, said Monday was her first day on the job in one of the mall’s stores.

The hospital is treating 25 people injured in the attack, six of them in critical condition. Ukrainian authorities said on Tuesday that the strike killed at least 18 people and injured 59, while more than 40 are missing.

The strike sparked global outcry, with G7 leaders condemning it as “abominable” as they gathered for a summit in Germany.

“This is not an accidental blow, this is a calculated Russian strike,” Ukrainian President Volodymyr Zelenskyy said in an evening video speech. He said the death toll could rise.

He estimated that around 1,000 people were in the mall at the time of the strike. The city had a population of 217,000 before the invasion.

3. Russian opposition figure Ilya Yashin was jailed amid criticism of the war in Ukraine

A Moscow court sentenced one of the last remaining opposition leaders in Russia to 15 days in prison.

Ilya Yashin was arrested on Monday and taken to a detention center in the Luzhniki neighborhood of the Russian capital.

A reporter friend said the city councilor was arrested while walking in a Moscow park. He was convicted of “disobeying the police” during his arrest, according to the press service of the Moscow court.

Yashin denied any wrongdoing and said on Telegram that the allegations had been “fabricated”.

“I’m not crazy to argue with three cops,” he said, adding that his case could lead to a longer prison sentence.

Yashin is one of the very few politicians still in Russia to have openly criticized the Kremlin war in Ukraine. He was accused of discrediting the Russian military last month, according to independent news site Meduza, and sentenced to pay 90,000 rubles (1,600 euros).

The Ukrainian Security Service said Tuesday that it arrested a former Soviet KGB agent who helped direct Russian missile strikes that killed more than 50 soldiers at a military facility in the west of the country in March.

“As a result of missile attacks on Yavoriv training ground, more than 50 service personnel died and nearly 150 were injured,” the SBU said on Telegram.

In the aftermath of the missile attack, Ukraine claimed that 35 soldiers had been killed in the facility, which was located 25 kilometers from the Polish border.

The suspect, a native of the western city of Lviv, is being detained and investigated for treason, the prosecutor’s office said.

Bulgaria said Tuesday that it was expelling 70 Russian diplomatic personnel for espionage reasons and had set a limit on the size of the Moscow representation as tensions between two countries that were once close allies fractured over Ukraine.

The move, announced by the foreign ministry and the outgoing prime minister, was Sofia’s largest expulsion of Russian diplomats in recent years and more than half of Moscow’s diplomatic footprint in the Balkan country.

According to the Russian state news agency TASS, Moscow should respond.

“Today we expelled 70 Russian diplomats … Many of them worked directly for the (intelligence) services and their diplomatic role was more like a cover,” Bulgarian Prime Minister Kiril Petkov said last week. lost a parliamentary distrust vote.