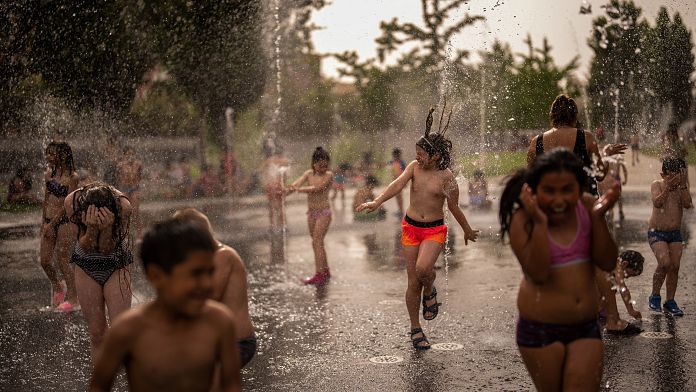 An intense and unprecedented heat wave is baking Western Europe, with temperatures in many places exceeding 40 ° C on Saturday.

Temperatures were high across much of Western Europe on the first day of the weekend. However, France and the Iberian Peninsula have been particularly hard hit.

In southwestern France, there were peaks close to 42/43 ° C, as the city of Biarritz broke an “absolute” temperature record.

Nearly three-quarters of the country’s population, around 45 million people, have received red or orange heat warnings in what is the first ever recorded heat wave in France.

For some in Paris, especially those who lived in old, cramped apartments, the scorching heat was too much to bear.

Christian Thurillat, 70, told Euronews he was struggling to cope and largely unable to sleep.

Many regions of France also experienced high levels of toxic ozone concentrations as a result of Saturday’s heat wave, according to the country’s official Prev’Air bulletin.

Ozone, a so-called “secondary” pollutant, is created when pollutants released from road traffic and industrial compounds, such as solvents and hydrocarbons, react with sunlight.

Areas of Western and Southern Europe are already rationing water amidst the sweltering heat, with a very dry spring that puts strain on water systems.

Scientists have said that the multiplication of heat waves in Europe is a direct consequence of global warming, with the World Meteorological Organization warning that this is just a “foretaste of the future”.

Greenhouse gas emissions from human activity are increasing the strength, duration and repetition rate of heat waves around the world.

Faced with this exceptional situation, the festive, sporting and cultural events have been canceled in France.

From Saturday evening occasional thunderstorms could occur on the French Atlantic coast, which means that the heatwave could gradually subside, especially in the worst-affected areas of the southwest.

In Spain, firefighters continued to put out several fires across the country, which broke out due to drought.

The most devastating firefighters evacuate 14 villages, gathering several hundred inhabitants in the Sierra de la Culebra, a mountain range in the region of Castile and León, near the border with Portugal.

According to regional authorities, some of them were able to return to their homes on Saturday morning as the flames had moved away from their homes.

Almost 20,000 hectares of land were burned by the gigantic fires that hit Spain.

In northern Italy, several municipalities have announced water rationing and northern Lombardy has hinted at declaring a state of emergency as a record drought threatens crops.

“What we are seeing today is unfortunately a taste of the future,” he added.

Temperatures in London remained well below 20, with rain and clouds hitting the British capital.