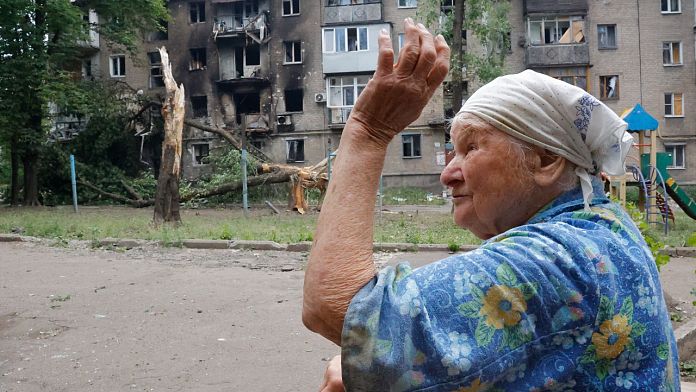 1. Russia beats Kharkiv “in the same way as Mariupol”

Russian forces hammered Kharkiv and the surrounding countryside with rockets, killing at least 20 people on Tuesday and Wednesday morning, in what Kiev called an attempt to force it to withdraw resources from the main battlefield to protect civilians from attack.

The attacks on Ukraine’s second largest city were the worst in weeks in the area where normal life had returned since Ukraine pushed Russian forces back in a major counter-offensive last month.

Kharkiv prosecutor Mikhailo Martosh told Reuters it was likely caused by multiple rocket launchers while he was in the ruins of cottages in a rural area on the outskirts of the city.

Health workers transported the body of an elderly woman out of the rubble of a burnt garage and into a nearby van.

“She was 85 years old. A daughter of war (World War II). She survived a war, but she didn’t get over it,” said her grandson Mykyta. “There’s nowhere to escape … she didn’t want to go anywhere from here.”

“Russian forces are now hitting the city of Kharkiv in the same way they were hitting Mariupol before, with the aim of terrorizing the population,” Ukrainian presidential adviser Oleksiy Arestovych said in a video.

In MykolaivA Russian missile attack on Wednesday killed at least one person and damaged buildings including a school, the local mayor said. Regional Governor Vitaliy Kim said earlier that seven missiles had hit the southern city.

In the main battlefield city of Sieverodonetskwhere Russia claimed to have surrounded Ukrainian forces since last week, scenes shot by a freelance journalist made it clear that the battle was not over, with Ukrainian troops able to supply their garrison by crossing a river in rubber boats.

Inside RussiaA fire hit an oil refinery just 8 km (5 miles) from the Ukrainian border after what the refinery described as a cross-border attack by two drones.

Production was suspended at the Russian oil refinery in Novoshakhtinsk, on the Russian side of the border with the Donbas territory controlled by pro-Russian separatists.

There were no immediate Ukrainian comments. The local emergency service, quoted by Interfax, said no one was injured and the fire was put out.

Ukrainian forces claim to have achieved “significant” victory against Russian forces after launching a new recapture attempt The island of snakes in the Black Sea.

2. More than half of the Russian separatist force is dead or injured, the UK says

Wednesday’s intelligence update from the British Ministry of Defense says the pro-Russian force in the self-declared Donetsk People’s Republic (DPR) appears to have lost more than half of its forces due to death or injury, according to its same calculations.

He says the data published by the separatists mean that “the casualty rate is equivalent to about 55% of its original strength.” This “highlights the extraordinary wear and tear that Russian and pro-Russian forces are undergoing in the Donbas,” she adds.

On June 16, the DPR recognized 2128 soldiers killed in action and 8897 wounded, the UK ministry said. He adds that on both sides the ability to generate and deploy reserve units will likely be crucial to the outcome of the war.

A Ukrainian photojournalist and a soldier accompanying him appeared to have been “cold executed” during the first weeks of the war in Ukraine as they searched the Russian-occupied woods for the missing photographer’s camera drone, Reporters Without Borders reported Wednesday.

The press freedom group said it had sent investigators back to the woods north of the capital, Kiev, where the bodies of Maks Levin and soldier Oleksiy Chernyshov were found on 1 April. The group said his team counted 14 bullet holes in the burned-out carcass of the couple’s car, which remained in place.

Some of Levin and Chernyshov’s personal belongings, including the soldier’s ID documents and parts of his body armor and the photographer’s helmet, were recovered, Reporters Without Borders said.

A Ukrainian metal detector team also located a bullet buried in the ground where Levin’s body was, it is said. The group said the finding suggests “he was probably killed with one, possibly two bullets fired at close range when he was already on the ground.”

A petrol can was also found near where Chernyshov’s burned body was found, he added.

Reporters Without Borders said his findings “show that the two men were undoubtedly cold executed.”

“Since the start of the war, the Russian target (of Ukraine’s allies) has been successful 29% of the time”, Microsoft president Brad Smith wrotewith data theft in at least a quarter of successful network intrusions.

Nearly two-thirds of the cyber espionage targets concerned NATO members. The United States was the main target, followed by Poland, the main channel for military assistance flowing to Ukraine. Over the past two months, Denmark, Norway, Finland, Sweden and Turkey have seen an increase in targeting,

A surprising exception is Estonia, where Microsoft said it hasn’t detected Russian cyber intrusions since Russia invaded Ukraine. The company credited Estonia’s adoption of cloud computing, where it is easier to detect intruders.

“There remain significant collective defensive weaknesses” among some other European governments, Microsoft said, without identifying them.

Using artificial intelligence tools, Microsoft said, it estimated that “Russian cyber influence operations successfully increased the spread of Russian propaganda after the war began by 216% in Ukraine and 82% in the United States.”

5. Zelenskyy launches a charm offensive before the decision on the EU candidacy

Volodymyr Zelenskyy has embarked on a charming offensive ahead of a crucial summit on the possibility of Ukraine becoming a candidate for EU membership.

Brussels has given the green light to Ukraine and Moldova, but the final decision rests with the European Council, which is made up of leaders from EU countries.

In a flurry of tweets, the president of Ukraine said he spoke with leaders across the bloc to thank them for supporting Kiev’s candidacy to run.

A high-level government figure overseeing the country’s push to join the European Union said Wednesday it was “100%” certain that all 27 EU nations would approve Ukraine’s bid for membership.

Deputy Prime Minister Olha Stefanishyna said the decision could come as soon as Thursday, the first day of the two-day EU leaders’ summit in Brussels.