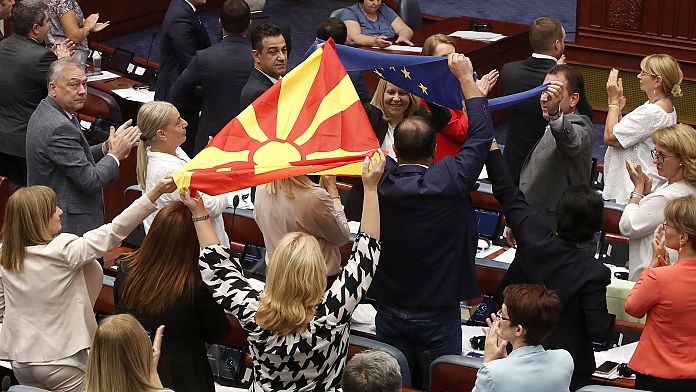 North Macedonia lawmakers have backed a controversial French-brokered deal that aims to settle a dispute with Bulgaria and pave the way for EU accession talks.

Opposition lawmakers interrupted the vote with shouts and a strike, but passed with 68 votes in favor in the 120-member parliament.

The proposal, which has not been made public since it was first proposed in late June, sparked daily protests in the country’s capital, Skopje, with thousands gathered in front of major government buildings for nearly two weeks.

North Macedonia has been a candidate for EU membership for 17 years, but the start of the talks was blocked first by Greece – which was terminated by the 2019 Prespa agreement – only to be followed by the Bulgarian veto in the 2020.

The GERB-led government of former Prime Minister Boyko Borissov blocked the negotiations by claiming that the history, culture and language of North Macedonia all derive from Bulgaria.

According to the so-called French proposal, North Macedonia would undertake to amend its constitution to recognize a Bulgarian minority and to undergo an annual review by the EU institutions of its relations with Sofia.

According to the 2021 census, there were approximately 3,500 ethnic Bulgarians in the Western Balkan country of 2.08 million.

About 97,000 Macedonians have acquired Bulgarian citizenship over the past two decades, a trend that intensified when Bulgaria joined the bloc in 2007.

The two countries signed a treaty on good neighborly relations in 2017, setting up a bilateral commission charged with resolving historical disputes.

However, it will not be easy for North Macedonia to revise its constitution.

The task would require a two-thirds majority to pass the amendment, and the country’s main opposition party, the right-wing VMRO-DPMNE, said it would not support the change.

‘Historic opportunity caught’, says the head of the European Commission

Despite this obstacle, the international community praised Saturday’s vote.

She traveled to Skopje on July 14 to urge lawmakers to support the deal.

US Secretary of State Antony Blinken also welcomed the vote, applauding “the difficult compromises considered in this compromise, which recognizes and respects the cultural identity of North Macedonia and the Macedonian language”.

Citizens are divided on the issue, with some concerned that the Bulgarian side may continue to insist on its original demands, including the language issue.

“I’m not satisfied,” a man told Euronews about the vote. “I am Macedonian, not Bulgarian. We have been Macedonians for generations. Whoever wants to be Bulgarian, be it. I am Macedonian and this agreement is very bad. “

However, another man said he was undecided: “To tell the truth, I don’t commit myself anywhere. But I still think it will get better now. “

The EU will start accession negotiations with Albania and North Macedonia next Tuesday.

North Macedonia will have two initial intergovernmental conferences to mark the start of accession talks, a precedent that some say could complicate and extend the accession pathways of other potential member countries as well.

It will also be tasked with complying with the bloc’s standards across 35 thematic chapters, which proved to be a lengthy process for the likes of Serbia and Montenegro.